"A Taste of F#" video lecture by Don Syme

Without further ado, here is Don Syme's recent Tech-Ed lecture on F# today and in the future:

Winner of the British Computer Society’s Roger Needham award, Byron Cook, described why F# is his language of choice in a recent interview:

"F# is like waterfowl: it looks very graceful and calm from above, but below the water its legs are furiously working to protect you from the reality below..."

Zoho are running a poll about language preference on .NET:

The results show a surprisingly large proportion of developers now choosing F#, even more than VB!

A pangram is a phrase that uses every letter of the alphabet. The following F# function can be used to check a string to see if it constitutes a pangram:

Note how easy F# makes it to build sets from arbitrary sequences (lists and strings of characters, in this case) and perform set theoretic operations such as set difference (and union and intersection) on them. This basic functionality has a wide variety of applications ranging from the manipulation of strings seen here to the computation of nth-nearest neighbors in computational science (see the article Traversing networks: the nth-nearest neighbor in The F#.NET Journal).

For example, the following verifies a popular English pangram:

The F#.NET Journal just published an article about computational geometry:

"Computing the convex hull of a set of points is a challenge of fundamental importance in computational geometry. Other tasks such as Delaunay triangulation can be built upon a convex hull algorithm and then tasks such as Ruppert's algorithm may be built upon those. This article describes the design and implementation of the quickhull algorithm in just 10 lines of F# code before going on to build a WPF-based GUI application that can be used to manipulate a convex hull interactively..."

When run from an F# interactive session, this program produces the following output: 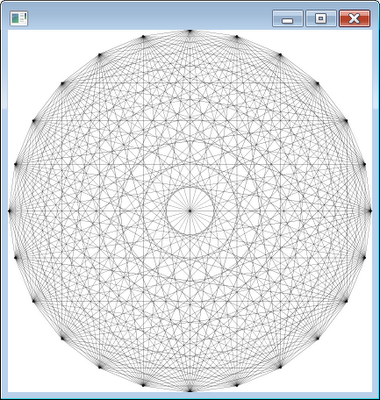 Being able to solve simple problems simply and scale it up to sophisticated commercial software is why I love F#!

The F#.NET Journal just published an article about concurrent programming:

"Asynchronous workflows are an incredibly useful feature of the F# programming language in the context of concurrent programming. This article describes a simple concurrent program that provides a relay server that can be instructed to connect to a TCP server and forward messages to it..."

There are now dozens of F#-related articles at The Code Project covering a variety of interesting topics.

Some vendors have also started to publish literature describing how their products can be used from F#. For example, the Extreme Optimization high-performance numerical libraries for .NET now provide examples in F#.

Recent events like Microsoft's PDC 2010 including a lecture from Don Syme on The Future of F# and the recent release of the F# compiler and tool stack as open source software have massively boosted the visibility of F# which is great to see, not least because sales of Visual F# 2010 for Technical Computing just doubled!

Don Syme now has 349 followers on Twitter. Doesn't sound like an amazing accomplishment until you learn that Don has never tweeted anything in his life! Apparently he is too busy flying around the world giving awe-inspiring presentations about the F# programming language he created.

According to Phil Trelford, Twitter is hot for F# right now so I couldn't help but get my own account and start tweeting!